I didn’t want to stain or color my guitar.  I just wanted a simple clear coat.  I hemmed and hawed about which method to use, but I eventually broke down and bought a spray gun and used some nitrocellulose spraying lacquer that I got from Stew-Mac.  I’m glad I did, spraying was a lot easier than I thought and there’s no way I would have been able to get the lacquer spread as uniformly as I did with a brush.

Before I began spraying lacquer I carefully went over the whole guitar with some fine sandpaper and made sure everything was as smooth and finished as I could make it.  Then I used a vacuum to get the dust out of the pores in the wood and finished off by wiping the guitar down with a damp cloth.  Next I taped off the location of the bridge and the fretboard.  I didn’t have a really long ruler to position the bridge off of the face of the nut so I just used a tape measure as shown in the picture below, it worked just fine.

I used some pieces of old foam to fill up the soundhole to keep lacquer from getting in, if I did it again I’d make sure to put a plastic coffee can lid between the foam and the soundboard as J. Sevy did, I had trouble with the foam sticking to the rim of the soundhole.  But it worked okay despite.

The picture below shows the guitar ready for finishing. I applied a water based wood filler over the mahogany to try and fill in the pores.  I wasn’t very happy with how the filler worked for me, I should have tried harder to match the color of the mahogany.  If I ever do this again I don’t think I’ll use this type of wood filler.  If I was painting the guitar then I think it would be perfect, but I just didn’t like it for my application (then again I’m the novice of novice finishers so what do I know).

After the filler had dried I sanded and wiped down the guitar and started spraying on the lacquer.  I sprayed a couple of coats on before   flattening down the bumps with wet sanding.  I repeated this process a couple more times. Once I finished applying the lacquer I moved on to buffing.  I just used some automotive buffing compound.  The picture below shows the finish on the back of the body after the first bout of buffing.

And after a couple more rounds…

Once the finish was done I only had to install the frets, glue on the bridge, fit the nut and saddle and then put the strings on!!  I have to admit it was around this point that the quality of my work declined, all I wanted to do was hear what this thing was going to sound like, and so quality was sacrificed for speed…

Installing the frets wasn’t too bad.  I put a strip of glue on the barbs and then carefully hammered them in leaving a little bit extra sticking out as shown in the picture. 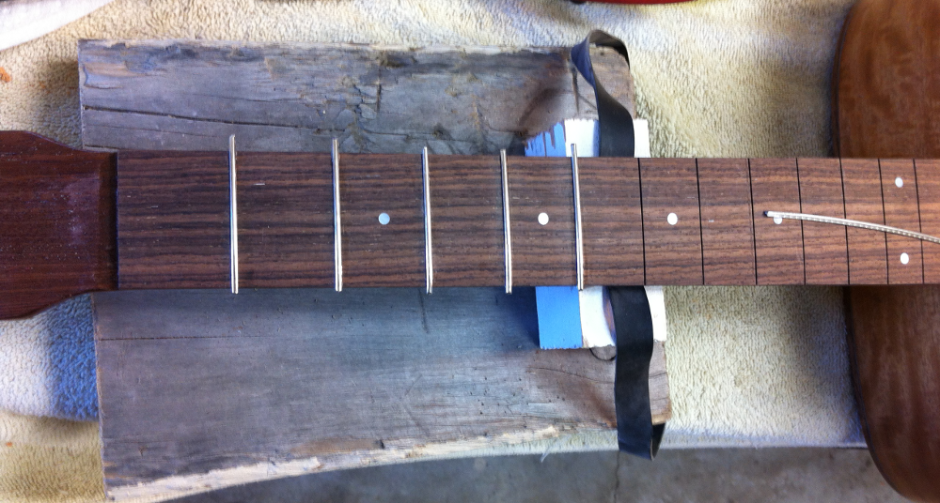 When the glue dried I cut them off with some end snips and filed down the ends as shown below.  I also used the file on the tops of the frets to knock down any high spots. Once the glue dried I finished drilling out the bridge holes into the soundboard and bridge brace below.  I applied a simple oil finish to the bridge (the same for the fretboard).

I made a small slot for the nut with the depth stop fretsaw that I bought.  I setup a guide as shown below and just kept making cuts until I’d made the whole slot.

And lastly I shaped both the nut and saddle.  I made them out of bone (its smelly stuff and I don’ t think the dust is very good for a person to breathe).  I cut them down to the rough dimensions with a hand saw and then sanded them down until I was satisfied with their shape, I found the fretboard radiusing board to be particularly helpful.

After I finished the nut and saddle I installed the tuning machines and put the strings on for the first time.  That took some time; I had to fit each bridge pin for the first time so that the strings would sit properly in their holes.  I also had to cut groves in the nut for the strings to sit in which was kind of a pain since I don’t really have the right tools for doing that, but I managed with my fretsaw.  And then I was done.